- Net sales of $3.0 billion for 2016 and $480 million for the fourth quarter
- GAAP loss per share of $(3.48) for 2016 and $(6.92) for the fourth quarter
- Non-GAAP EPS of $5.17 for 2016 and $1.24 for the fourth quarter
- Cash and marketable securities of $2.0 billion, net cash of $1.8 billion
- Maintain Non-GAAP 2017 EPS guidance
First Solar, Inc. today announced financial results for the fourth quarter and year ended December 31, 2016. Net sales for the fourth quarter were $480 million, a decrease of $208 million from the prior quarter due to the completion of multiple systems projects during the quarter, partially offset by higher module-only sales.
The Company reported a fourth quarter loss per share of $(6.92), compared to earnings per share of $1.63 in the prior quarter. The fourth quarter was impacted by pre-tax charges of $729 million, primarily related to previously announced restructuring actions. Restructuring related charges in the third quarter were $4 million. Fourth quarter non-GAAP earnings per share, adjusted for restructuring charges and a tax expense associated with a distribution of cash to the United States, were $1.24. Net income decreased versus the prior quarter as a result of lower net sales, higher restructuring charges and an increase in tax expense, partially offset by an increase in equity in earnings. During the fourth quarter, the Company completed the sale of its remaining interest in the Desert Stateline project and recognized $125 million of profit, net of tax, in equity in earnings.
Cash and marketable securities at the end of the fourth quarter decreased slightly to $2.0 billion from $2.1 billion in the prior quarter. The decrease was due to the repayment in full of the Company's borrowing under its revolving credit facility, largely offset by cash from project sales. Cash flows from operations were $268 million in the fourth quarter. The approximately $280 million of proceeds received in the quarter from the sale of the remaining interest in the Desert Stateline project were treated as an investing cash flow.
"Despite the difficult restructuring decisions that we undertook in the fourth quarter, we ended the year with strong operational results," said Mark Widmar, CEO of First Solar. "Our best line exited the quarter running above 16.9% conversion efficiency, and for the full year our fleet averaged 16.4% efficiency, an 80 basis point improvement over the prior year. From a financial perspective we delivered full year non-GAAP earnings per share of $5.17, exceeding our guidance for the year. We ended the year with $1.8 billion of net cash and are well positioned as we move forward with our Series 6 transition."
The Company updated its 2017 revenue guidance, operating expenses and earnings per share as reflected in the following table. The revised net sales guidance incorporates the final structuring of the Moapa project sale, which allowed for full revenue recognition on the project, while the revised operating expenses guidance reflects the timing of certain restructuring charges that are now anticipated in 2017. 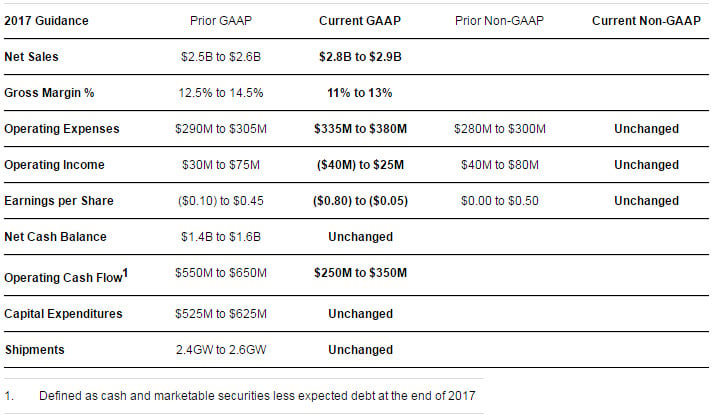