First Solar, Inc. announced financial results for the second quarter of 2017. Net sales for the second quarter were $623 million, a decrease of $269 million from the prior quarter primarily due to lower systems sales, partially offset by higher third-party module sales.
The Company reported second quarter earnings of $0.50 per share, compared to earnings of $0.09 per share in the prior quarter. The second quarter was impacted by pre-tax restructuring and asset impairment charges of $18 million, related to previously announced actions. Restructuring and asset impairment charges in the first quarter were $20 million. Net income increased versus the prior quarter primarily as a result of improved gross margin and a discrete income tax benefit, partially offset by a decrease in other income. Second quarter non-GAAP earnings per share, adjusted for restructuring and asset impairment charges, were $0.64, compared to $0.25 in the first quarter.
Cash and marketable securities at the end of the second quarter decreased to $2.2 billion from $2.4 billion in the prior quarter. The decrease primarily resulted from a higher accounts receivable balance associated with the timing of certain recent module and project sales where payment is expected to be received in the third quarter. Cash flows used in operations were $168 million in the second quarter.
"We executed well in the second quarter with solid non-GAAP earnings of $0.64, record quarterly shipments of nearly 900MWdc and bookings of 1.5GWdc since our last earnings call," said Mark Widmar, CEO of First Solar. "We are encouraged by the continuing strong demand for our Series 4 product and are focused on meeting our customers'current needs. At the same time, our efforts to ensure the manufacturing and market readiness of Series 6 remains our highest priority. With the first Series 6 equipment being installed at our Ohio factory, and an increasing number of mid-to-late stage Series 6 bookings opportunities, we are pleased with our progress thus far."
The Company raised its revenue, earnings per share, operating cash flow and net cash guidance for the year as a result of improved visibility into the sale of systems projects, a discrete tax benefit in the second quarter and continuing operational improvements. 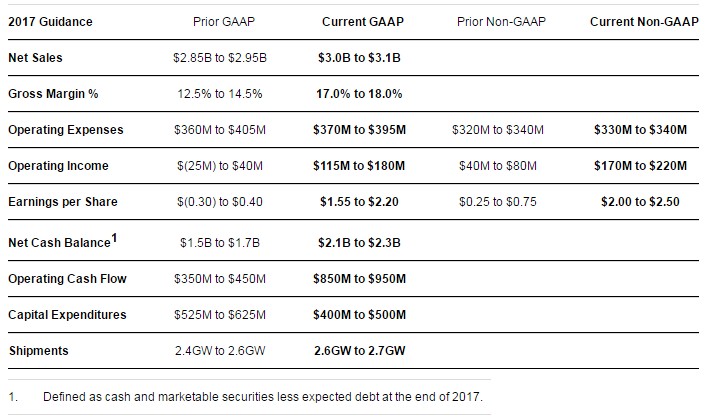