Manz AG Publishes Report on the First Three Months of 2019

- Revenue considerably expanded by 12 % to 77 million euros
- Both EBITDA and EBIT positive and considerably improved over previous year
- Overall annual forecast for 2019 confirmed
Manz AG today publishes its quarterly report on the first three months of 2019. The report states the company considerably increased revenues in the first quarter to 76.8 million euros (previous year: 68.5 million euros¹). Earnings before interest, tax, depreciation and amortization (EBITDA) in the 2019 reporting period was 5.1 million euros, and roughly 7 million euros above the previous year's value of -1.6 million euros¹. Earnings before interest and taxes (EBIT) amounted to 0.6 million euros (previous year: -3.5 million euros¹).
Martin Drasch, CEO Manz AG, comments: "We continued to consistently develop our business model and product portfolio in 2018. Our goal is to sustainably improve the competitiveness and profitability of Manz AG. The developments of the last few quarters show we are on the right path. Not least, we see multiple orders totaling around 10 million euros, which we recently received in the Electronics segment for laser systems and our fully integrated LightAssembly platform, as confirmation of our positive assessment. This has allowed us to further expand our customer base in the medical, industrial electronics and consumer electronics industries."
Corresponding to the progress of the CIGS project, the Solar segment showed a reduction in revenues from the previous year and a significant positive profit contribution, which was within the overall annual forecast. Revenues in the Electronics segment were significantly above the previous year's level. In line with expectations, the segment results were also much better, although they remained negative. The Energy Storage segment had a restrained start to the fiscal year, due to the pending decisions to award funds from grant programs on both the European and federal levels. Against the backdrop of expected significant incoming orders in subsequent quarters, the Management Board continues to see the segment after the first quarter in line with expectations for the year as a whole. In the Contract Manufacturing segment, both revenues and earnings improved in comparison to values for the previous year. Service revenue was stable, and earnings were below the previous year due to a changed product mix.
With the business development in the first quarter of 2019, incoming orders of 41.0 million euros, and a value of orders on hand of 196.7 million euros as of March 30, 2019, the Management Board considers Manz AG to be on course to meet projected targets for the full year 2019. Assuming framework conditions remain unchanged and that the expected significant incoming orders are received in the Energy Storage segment, therefore, the Management Board expects an increase in revenues of between 10% and 14% in the current fiscal year, in comparison to 2018. The Management Board also expects a positive EBITDA margin in the mid single-digit percentage range and a positive EBIT margin in the low single-digit percentage range.
¹As part of a correction, Manz has deconsolidated retroactively from Talus Manufacturing Ltd., a formerly fully consolidated company, and now includes this company in its annual statement as an associated company. See Annual Report 2018, Chapter "Consolidation Range".
2019 Q1 revenue, EBITDA, and EBIT compared to the previous year 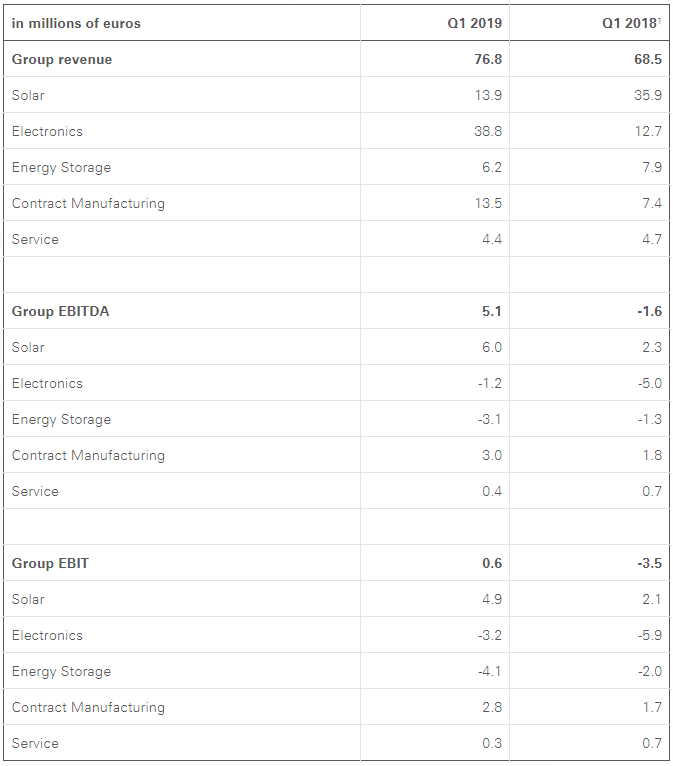