Trannergy Offered Inverters for Rooftops Projects in 30 Schools of Denmark

Jan. 10, 2014 - Trannergy today announced that, all the rooftop projects which Trannergy have participated in 30 schools of Denmark have been successfully tested and connected to the grid.
Laura, spokesman of the project said, "we have used about 50 units of 10kW-20kW Trannergy TRI Series three-phase inverters in all. Initially, we had some machines installed in the school basements and storerooms, but Trannergy inverters' noise control performance was completely beyond our imagination, even at full capacity, the noise control performance is very good."
"Then we tried putting some inverters installed in the corridor of the school where the kids can easily see during the class break. We hope that through this direct show, kids can be closely in contact with clean energy, so that they can grow up in the environmental awareness. At the same time, their (Trannergy) monitoring platform clearly demonstrates how much carbon dioxide emissions are created per day. Kids are very curious and happy to hear that." 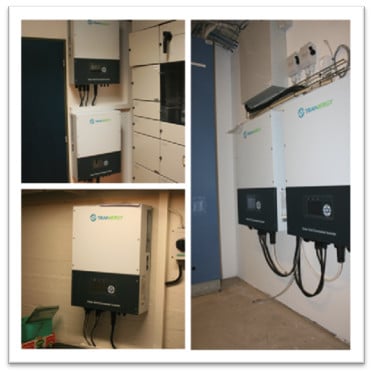