BayWa r.e. together with other research partners, have built an Agri-PV research facility for apples and espalier fruit at the Nachtwey organic fruit farm in Gelsdorf in Rhineland-Palatinate, Germany. 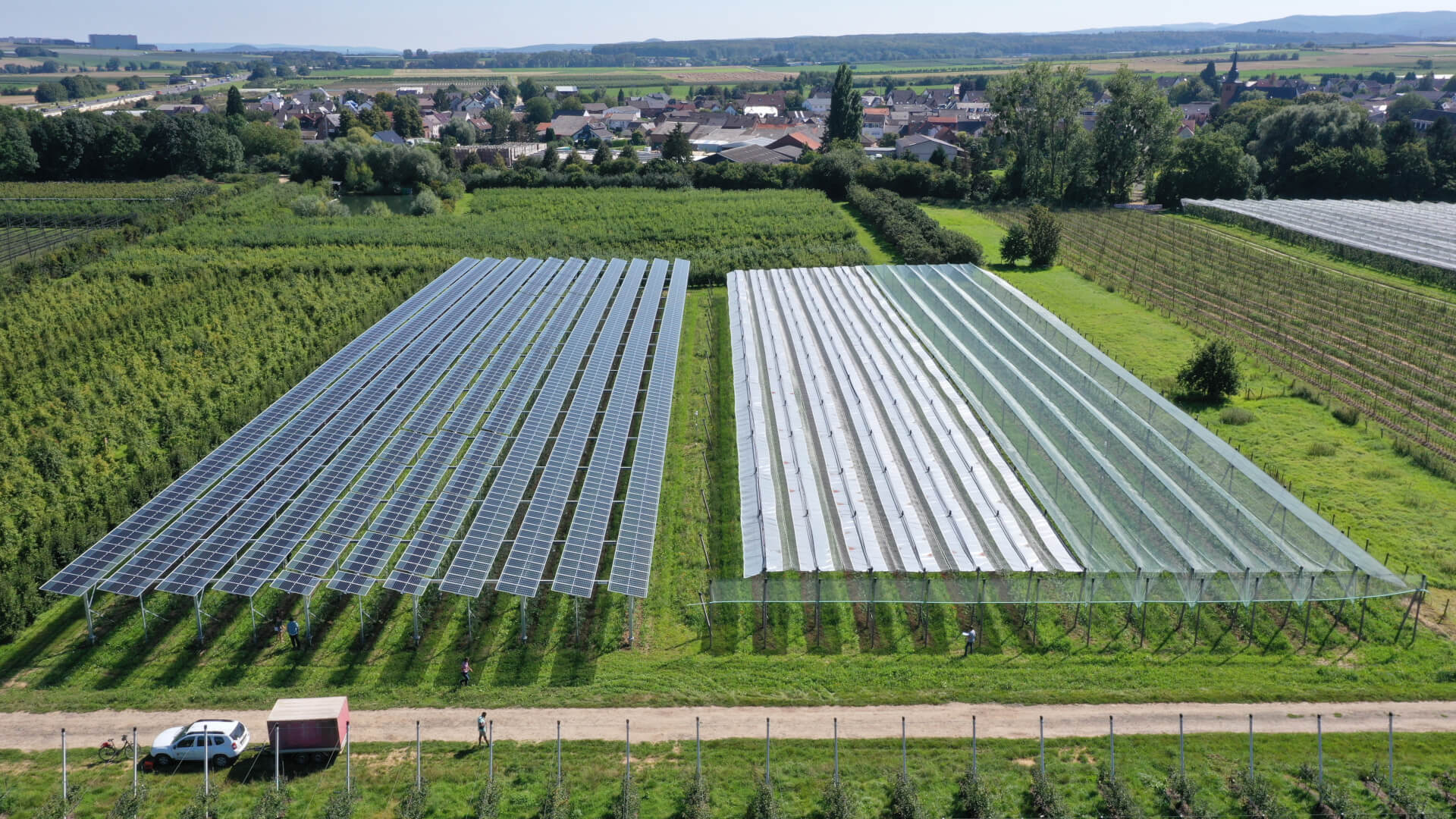 The primary objective of the project, which is funded by the German Ministry of Environment, Energy, Food and Forestry of Rhineland-Palatinate (MUEEF) and the Federal Ministry of Food and Agriculture (BMEL), is to increase climate resilience in fruit growing and to ensure safe and sustainable apple production with additional solar power generation.
As part of the project, which will run for five years, numerous factors will be investigated on eight varieties of apple.
The project will begin by comparing apple production at the same site under three different crop protection systems: Foil Protection (non-rain permeable), Hail Protection (rain permeable), and Agri-PV with fixed light permeable PV modules (non-rain permeable) and tracked PV modules (rain permeable when needed). The project will investigate to what extent Agri-PV systems can protect plants and fruit from harmful environmental influences such as hail, heavy rain, sunburn, frost or extreme temperatures.
It will also explore light management options by testing different PV module configurations to identify the impact on plant growth and agricultural yields.
Finally, the project will take into account the landscape aesthetics, economic efficiency, social compatibility as well as crop production parameters.
Stephan Schindele, Head of Product Management Agri-PV at BayWa r.e. comments on the project: "We see Agri-PV as a long-term solution to help farmers adapt to the consequences of climate change. We can preserve the existing ecosystem and even enhance it through synergy effects and solar power generation."
"Following our successful establishment of professional berry cultivation under Agri-PV in the Netherlands, we are now taking the important step towards espalier fruit in Gelsdorf. We have recognised that the potential synergies for Agri-PV combined with apple, pear, cherry, kiwi and other permanent crops are considerable. We would like to develop this potential permanently and enable further expansion of photovoltaics without limiting agricultural yields."
In addition to adapting to climate change and protecting agricultural assets, the Agri-PV project in Gelsdorf also aims to demonstrate the economic benefits for farmers. These include permanently lower and more predictable energy costs, lower investment costs in crop protection, and lower operational and waste disposal costs.
Andreas Steinhüser, Deputy Group Leader Agri-Photovoltaics at Fraunhofer ISE, adds: "The research project "Agri-PV Fruit Growing" is not only intended to identify possibilities to reduce CO2 emissions in agriculture, but also to avoid the use of short-life material, pesticides and fungicides, making a decisive contribution to climate protection. In addition, we are focusing on social issues such as acceptance and social compatibility, as these aspects will play a decisive role in the wider adoption of Agri-PV."
The electricity generated by the Agri-PV system can be used during the time before and after apple production. The battery-electric tractor Fendt 100 Vario provided by AGCO GmbH is charged with the electricity from the system, while the energy is also used to supply the watering system with Agri-PV's own electricity. The cold storage facility is already supplied with green electricity from a rooftop PV system. Overall, the implementation of an operational energy concept seeks to significantly reduce CO2 emissions on the farm through solar electrification.
In addition, BayWa r.e. can draw on the many years of expertise in fruit growing from its parent company BayWa AG. The film and hail protection systems next to the Agri-PV plant in Gelsdorf were implemented by "BayWa Agrar Obst und Hopfenzentrum" (BayWa Agricultural Fruit and Hops Center) from Tettnang. The plant's physiological monitoring is made possible by "NEXT Farming". With the help of this software management system from BayWa AG, farmers can control their entire operation as well as watering. Via data monitoring and weather forecasts, farmers are continuously informed about possible risks in order to be able to control their cultivation.
Benedikt Ortmann, Global Director of Solar Projects at BayWa r.e., summarizes: "In Europe in particular, where there are large areas of fruit growth under cultivation, we see enormous potential for Agri-PV. With this research project, we want to show how sustainable, high-quality apple production can succeed and at the same time drive forward the energy transition.
"Together with agricultural sector, we are creating a jointly beneficial situation for everyone in the fight against climate change."
In addition to BayWa r.e. and Fraunhofer ISE, other research partners involved in the project include DLR Rheinpfalz (agricultural science), Fendt, EWS Schönau and the Nachtwey organic fruit farm.